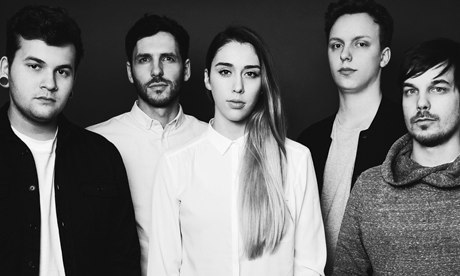 The background: Historically when a band has taken a simple christian or surname – the Smiths, James, Raymonde – it has signalled an intention on the part of the musicians to return to indie simplicity and modesty. But Claire, a five-piece from Germany, have mainstream pop ambitions, and they are not strangers to pomp, if not circumstance. There is a degree of bombast in their music, and some majesty. Like many of the best electronic pop groups, they evidently come from leftfield, but they don’t appear to want to stay there. Some can hear a more boisterous xx in their synthesized surges, or a Teutonic Chvrches, but those are albums-bands, really, when we can hear proper hit singles here, Icona Pop-sized ones.

They’ve just signed to major label Capitol, had praise from Pitchfork, NYLON and the New York Times, played this year’s CMJ and toured with Chvrches and Bastille, which just goes to show how many ones-to-watch didn’t make all the recent Ones to Watch lists. You – or, at least, Londoners – can see for yourselves what the fuss is about in January when they play a couple of dates in the capital. Or you could wait for the February release of their single, Games – their debut in the UK – to hear signs of their pop potential. The video shows a bunch of young friends – Claire, presumably – going to the beach, swimming and generally having summer fun. But the meaningful stares into the middle distance that interrupt the frolics hint at the sadness beneath the surface, and sure enough, despite the perky beat the melody shifts between jubilant and wan as the lyrics capture both transcendence and despair (“And you don’t seem to care…”).

There are a few people doing this sort of thing at the moment under the radar, from Classixx to Class Actress, but there is a stridency here, a confidence, that could make the commercial difference. The track Little Brother has the synth majesty of Simple Minds circa Sparkle in the Rain, although the reference to feeling “the wind on your nose” is a little bathetic. What’s wrong with “face”? There is also a reference to “fade to grey”: they love 1981. But Claire aren’t mere retro fetishists plying machine melancholy like all the rest. There’s a freshness and, more importantly, a boldness propelling their best songs that suggests a life beyond the nostalgia circuit. Invincible in particular edges towards I Love It territory in terms of anthemic playground catchiness, despite the talk in the lyrics of “shattered dreams and broken promises”. It even has a drop – file under Eurodance-pop. This should be the next single in the UK, managers and sundry people from Claire’s team. Our consultancy charges, by the way, remain competitive.

The truth: Don’t you forget about them.

Most likely to: Care.

What to buy: The single Games is released on February 23 by Capitol.