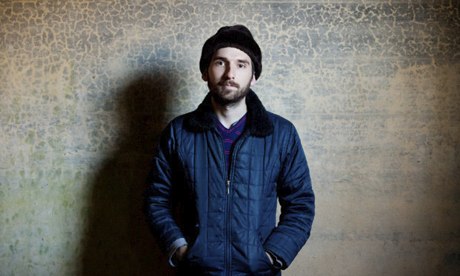 The background: “Look, this is a bloody great Sunday record,” wrote a Mancunian friend in an email on, funnily enough, Sunday, of the debut long-player by a young American called Jordan Lee who operates as Mutual Benefit. And here we are a full 48 hours later and, despite the fact that we get sent dozens of new artists each day for our consideration, it’s still refusing to budge from our record player. It’s a bloody great Tuesday record. Not that we’re playing the vinyl version, by the way. We’re being metaphorical, like.

As is Lee on that album of his, Love’s Crushing Diamond. There are titles on there such as Advanced Falconry and the record is bookended by Strong River and Strong Swimmer, but songs about water and winged creatures these are not. On Advanced Falconry, over piercing, keening violins, he waxes poetically about the subject of his affections: “The way she moves, always on her own/ And to look into her eyes/ Will make a fool of anyone.” And it’s not the bird from Kes.
Reading on mobile? Click here to listen

He moves around a lot, does Lee, from Ohio to Austin to Boston, and most recently to Brooklyn, where he ran the Kassette Klub label, whose raisons d’être included “collaboration, unabashed self-expression, music as art, kittens, and magic.” He formed Mutual Benefit as something between a solo project and an amorphous collective, equal parts self-expression and collaboration, and created LCD over a period of years using a mix of hi- and lo-fi techniques and a similarly varied instrumental lineup comprising keyboards, guitar, violin and banjo, plus assorted DIY percussion and found sounds.

It was originally going to be a cassette-only self-release, before some friends offered to start a label and press a limited edition 250 LP run. Then it got posted to Bandcamp and, much glowing recognition later – notably from Pitchfork, who named it their Best New Music, the first time a Bandcamp release had received such an accolade – here it is, being widely disseminated to the extent that people in Manchester are sending excitable emails to people in South Hertfordshire, encouraging them to check it out – on a weekend, no less. And we’re glad we did, because – call us old-fashioned – we love woozy, baroque indie-pop that sounds slightly out of tune and off-kilter and explores the highs and lows of the human condition as it navigates the choppy seas of romance, from heartbreak to elation and back. He oozes vulnerability, does Lee, and the discreet charm of the dumped chump. And all the while he comes across as slightly intoxicated, a sort of seasick sensation that seeps through his singing and the, well, the whole thing, really, from the playing to the production.

Not that his heightened state stops him from focusing on the details, of which LCD is full, from the wind chimes on Strong River – which builds blurrily to an is-this-record-on-the-wrong-speed pace and stays there, like a rustic MBV – to the glockenspiels of CL Rosarian and sweet, sweet violins and playful banjos of Advanced Falconry. That Light That’s Blinding threatens to be subsumed by a celestial sadness, but it’s offset by some dreamy drifting. Strong Swimmer ends the album with Lee channelling his best adult child. But what do those album-bookend titles mean? That love will prevail? That man is more powerful than any force nature can put in his path? And if so, what lesson do we learn from this, and how is it applicable to the vagaries of the human heart? We have no idea. We’re getting paid to find new music we likey, not examine the psyche.

The buzz: “The textures of this record are so pronounced, the colors running in waves so profound, that it’s almost impossible to believe that one man created them.”

The truth: A lovely, lovely record – any day of the week.

Most likely to: Swim.

What to buy: Love’s Crushing Diamond will be released by Other Music Recording Company on January 13.