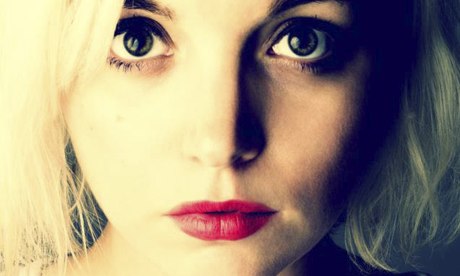 Modern-day purveyor of power ballads. Fully expect a semi, if not total, eclipse of the heart.

The background: Last Friday night we stood for several hours in the Electric Ballroom in London as 1,500 people went gaga, not to Lady Gaga, no, to a succession of ’80s power ballads at a night called Ultimate Power. Basically, if you like Foreigner and Journey, Whitesnake and Mister Mister, you were either there or you should have been, punching the air, livin’ on a prayer, enjoying the total eclipse of good taste and self-monitoring decorum.

And here we are, barely a week later, with a new purveyor of the form by the name of Molly Beanland, who used to be in the band Cub Scout. She could be Carol Decker’s niece or daughter or kid sister, you do the math. She writes – and sings, in a “mysterious, moi?” voice – the sort of epic, anthemic ’80s-style power ballads that get swept up in their own sense of drama. They might just draw you in – they may even take your breath away.

Beanland – whose name suggests Molly Ringwald acting in one of Grimm’s fairy tales – has a debut single out early next year. It is called Night Dreams and it is well T’Pau-esque, even if it’s not quite the full Bonnie Tyler. You can picture the dry ice now and imagine her in the video swathed in black lace, hats and scarves, having raided Kate Bush’s and Stevie Nicks’ wardrobes. The drums are of the gated variety and the chorus is as fulsome as the use of reverb. She describes the track as “the ultimate love-hurts tale” and someone else – perhaps Beanland herself or someone in thrall to her ultimate power – wrote of it: “Obsession and the greediest of lusts, both wonderful and terrible, painful and pleasurable, you know it’s driving you insane but you are hopelessly addicted. If Night Dreams were a movie it would be a thriller. Part-night terror, part-daydream.” That’s the effect she’s having on listeners, seducing with a knowing deployment of icy passion and controlled bombast.

The buzz: “Get ready to bust some moves in front of the mirror.”

The truth: Deck the halls with boughs of Molly.

Most likely to: Hold on for one more day.