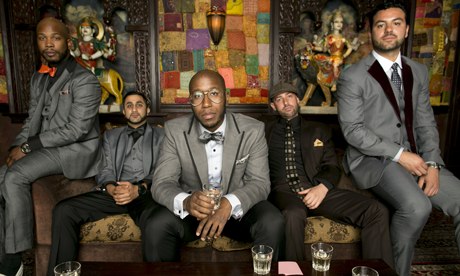 Dirty ’80s funk revisited from an outfit much loved by Prince.

The background: Like that other new-ish soul-dance outfit Quadron, Bad Rabbits have been around for a while but this is being touted as their moment to break out internationally. Actually, they’re also being touted as a black rock band, or a band fusing rock and funk, their co-producer is apparently a tattooed metal kid, and in the video to their track We Can Roll, the grainy black and white footage of them live and direct presents them as an edgy punk or metal band, a latterday Bad Brains (who they’ve supported on tour). In fact, one write-up described them as “like Sly Stone fronting Bad Brains”, while we totally overestimated, from the reviews, the guitar/rock quotient and were expecting a new Living Colour or Fishbone.

Funk-rock, funk-metal, “post-R&B futuristic funk-punk,” as one blog put it – Bad Rabbits are none of these things, really. They just sound like a funk band, mainly an ’80s funk band, albeit a bit raw, like a roughed-up Earth Wind & Fire, or the Dazz Band after a night on the razz. Teddy Riley (http://www.theguardian.com/music/2010/jul/15/unsung-influential-pop-heroes), the architect of swingbeat/New Jack Swing, produced their album American Dream, which we believe is being issued here in 2014, although their press release mentions a follow-up album called American Love, already recorded with the aforementioned illustrated metallurgist. Anyway, you can hear what they’re capable of on Spotify, hear what the fuss is about, find out what made Prince – who showed up to a gig of theirs in LA – go crazy (he also loves Quadron: Prince – he’s the go-to guy for marketable quotes on new R&B bands).

A lot of BR’s press focuses on their live show. It sounds like a scaled-down version of what Janelle Monae does, featuring old-school synchronised dance moves combined with assorted high-energy antics. Their music, as we say, sounds quite live – it’s not as slick or polished as you might expect. Can’t Fool Me introduces Fredua “Dua” Boakye’s raspy vocals, a far more throaty and full-bodied affair than Sly’s. Less snarky, too. The lyrics are straight, unreconstructed sexed-up loverman tropes. On Dirty, for example – which recalls Ray Parker Jr’s Ghostbusters, with a dash of Rick James – he cuts a sleazy figure while on She’s Bad he declares, “I wanna give it to you, baby.” Course he does. Still, for every generic come-on there’s an irresistible groove, the sort of stuff you could imagine hearing on a classic ’80s R&B station or in a budget movie about the decade where the producers couldn’t afford a proper Top 30 hit. We Can Roll is a sweaty showcase for superb musicianship that builds from a sultry keyboard intro into a synthgasmic ballad of purple proportions. American dreamy.

The buzz: “As if Michael Jackson, Pharrell Williams and Prince had some ridiculous three-way band love-child” – LA Music Blog.

The truth: Try and ignore the words – the music is a hoot.

Most likely to: Let it whip.

Least likely to: Fool us.

What to buy: You can hear lots of Bad Rabbits on Spotify.